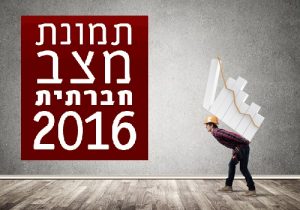 Adva Center’s annual publication for 2016: The fruits of the economic growth trickle upwards more than down

Equality and social justice are not a top priority of the Israeli government, which relies on economic growth to improve the quality of life of all Israelis. Yet, the fruits of the economic growth trickle upwards more than down. Therefore, state intervention is required.

Over the past 2-3 years we have seen a rise in wages which is, inter alia, the result of wage agreements the government signed with the teachers’ unions (“Ofek Hadash” and “Oz LaTmura”) and with public sector employees —  and of an increase in the minimum wage.

Yet, wage disparities are significant. In 2015 the gross monthly income of a household headed by a salaried employee was NIS 4,644 in the lowest decile and  NIS 58,293 in the top decile. The top two deciles (9 and 10) were responsible for some 43.9% of total household income, while the other 8 deciles shared the remaining 56.1%. It is important to note that there are huge gaps within the top decile between the uppermost one percent and the rest.

The problem is rooted in the fact that Israeli governments reduced their capacity for action and primarily their budgetary capacities. The result is the shrinking and narrowing of the social services the state provides: education, health, welfare and social security. In 2014, the total state expenditure (including local government) of 41.2% of the GDP placed Israel alongside the eastern European countries and nations with a tradition of low government expenses such as Canada and New Zealand (which spend less than Israel on security).

Furthermore, Israeli governments are concerned primarily with political and security problems, mainly the Palestinian conflict, expressed in frequent outbursts of violence. Israeli governments do not invest in the development of long-term plans to increase success rates in the matriculation exams, to enlarge the student population or to include the entire Israeli population in the “start-up nation”.

The national rate conceals significant differences among localities and population groups: An analysis by locality shows that Arab localities top the unemployment list, and that the Bedouin localities in the Negev are at the very peak. In the largest Bedouin locality of Rahat the rate of job seekers was 14.4%. Similar rates were found in some of the large Arab localities in the North, including Maghar (14.8%), Sahnin (14.7%), and Umm el Fahem (14.6%). In the majority of Jewish localities, the unemployment rate was lower than 5%, yet, in development towns like Mitzpe Ramon, Dimona and Yeruham, unemployment rates were 9.5%, 9.3% and 8.6% respectively.

The social gaps also impact health conditions. The level of health is a reflection of the quality of life, and, in general, of socio-economic status: the quality of nutrition, the environment, housing, the level of awareness of health hazards, and the accessibility of public transportation, employment, and health services. Differences in the general quality of life are translated into 2 main indicators used worldwide to mark gaps in health conditions: infant mortality and life expectancy.