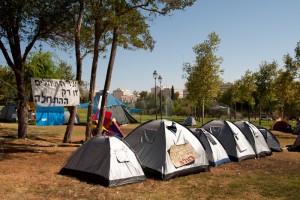 Israel’s Heart is in Western Europe, Her Feet are in the Eastern and Southern Fringes

Israel is not realizing its potential for economic growth, among others due to the absence of a political settlement with the Palestinians. The two intifadahs were very damaging to the Israeli economy, but more limited confrontations have become more frequent: the campaigns Days of Penitence (2004), Rainbow (2004), First Rain (2005) Summer Rains (2006), Hot Winter (2008) Cast Lead (2009-2009), Pillar of Defense (2012) and Protective Edge (2014). The direct economic implications of each of these confrontations was limited – the Bank of Israel estimates that the Protective Edge campaign reduced GDP by no more than 0.3% — but the accumulated effect of all the confrontations results in long-term harm to the social groups and geographic areas directly affected and creates an atmosphere of macro-economic instability.

Another obstacle in the way of raising the standard of living for all Israelis is that during the last decade at least, instead of trickling down, as the political leadership claims they do, the fruits of economic growth trickle up, defying nature. The share of employers in the national income grew over the last decade from 11% to 15%, at the expense of employees, whose share decreased from 66% to 62%. The only salaries that increased significantly were those of senior managers: the cost of their salaries doubled between 2000 and 2010. In 2013, the cost of the salaries of the general managers of the 100 largest corporations on the Tel Aviv Stock Market was on average NIS 6.158 million per year, or NIS 513,000 per month.