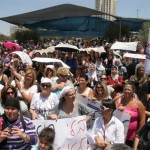 This is the most striking finding in a new Adva Center report, “Self-Employed Workers in Israel,” based on three Central Bureau of Statistics (CBS) population censuses: 1983, 1995 and 2008. The authors are Shlomo Swirski and Ariane Ophir.

5.       Among self-employed workers providing household and neighborhood services, there was a gender division of labor: At the top of the professions dominated by women was day care workers (89% women), beauticians and hairdressers (75%) and cleaning workers (72%). The professions dominated by men included electricians (100%), excavation, paving and lifting equipment operators  (100%) and plumbers (100%). In only five professions were women and men equally represented: academicians in the humanities, journalists, accounting workers, doctors/ pharmacists, and veterinarians.

10.   The main practical recommendation that emerges from the study is to merge self-employed workers   – certainly those who work alone or employ no more than 2 persons, with salaried workers, for the purpose of official data collection as well as policy making. If we add to the population of salaried workers, which today constitutes 87% of workers, the above self-employed persons, we will  have pooled data for 98% of the workforce.

The Care Deficit: What it Means and How it Can be Reduced
Inequality in Israel: In the End, Israel Produced its own 1%
Immigrants from the Former Soviet Union: A Snapshot of their Situation in the Israeli Labor Market
Workers, Employers and the Distribution of Israel’s National Income – Labor Report 2015
Gender Salary Gaps in Israel 2015