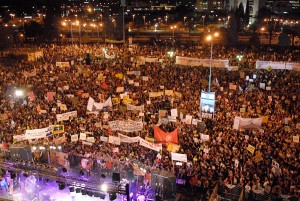 Since the end of the second intifadah, Israel’s economy has been growing: between 2000 and 2014, GDP increased by an average of 3.3% per year, higher than the average economic growth of OECD countries — 1.6%. Thus we would expect this growth to be reflected in the welfare of Israelis as a whole. However this has not happened: the median wage has hardly changed.

Long-range figures from the National Insurance Institute show that for some 25 years, and especially since the end of the second intifadah, the increase in GDP per capita in Israel has not been accompanied by a corresponding increase in real wages; in 2014, the gap between the two was larger than ever.

Below are some of the main findings of the new report:

1) Rather than trickling downwards, the fruits of economic growth have been trickling upwards, against the laws of nature.

3) All of the above figures are reflected in health statistics. Health status is connected to quality of life and in general, to class differences – quality of nutrition, quality of the environment and of housing,  level of awareness of health hazards, public transportation, employment, accessibility of health services and more. Differences in the general quality of life can be seen in two major indicators of health used throughout the world: infant mortality and life expectancy.

4) When it comes to dealing with social issues, the government of Israel looks to economic growth as the panacea, but as we have seen, the fruits of growth trickle up more than down. Reducing inequality requires strong state intervention. The problem is that successive governments have reduced their own abilities to act, especially their budgetary capabilities. The result is a waning of the social services provided by the state: education, health, welfare and social security services. Government expenditures (including transfers to local authorities) amounted to 41.2% of GDP in 2014, placing Israel close to Eastern European countries and others with a tradition of low government spending like New Zealand and Canada (whose defense expenditures are lower than Israel’s).

Not only that: Israeli governments are concerned primarily with security problems, first and foremost with the Palestinian conflict, expressed as it is in frequent violent confrontations. As such, Israel’s governments are not disposed to develop long-term plans to increase success rates in the matriculation exams, to buttress the student population or to broaden the limits of “the start-up nation” beyond “the state of Tel Aviv.”