Investment in transport infrastructure should indicate that an improvement is on the way, but transportation experts in Israel expect the exact opposite.

This increase stands out against the cuts in other investment budgets. Investment in transport infrastructure should indicate that an improvement is on the way, but transportation experts in Israel expect the exact opposite. This is the contention of a new budget document just published by the Adva Center, More Highways, More Congestion, written by economist Adi Sofer.

In international comparison, Israel’s investment in transportation infrastructure is not outstanding in terms of percentage of GDP, the accepted indicator. In recent years it has constituted one percent of GDP, similar to the OECD average.

Despite the large investment (relative to the investment budgets of other government ministries), the Ministry of Transport expects a loss of NIS 25 billion in 2030 due to congestion. The main reason for this prediction is the government’s preference for infrastructure investments that serve car travel over those that serve public transportation. This policy, while easing up some of the pressure on roads in the short run, has resulted in a growing dependence on car travel.

Railroad transport is the most efficient way of travel, especially in metropolitan areas. In comparison with developed countries in the OECD, which allocate approximately 40 percent of their transport investments to railroads –for metropolitan areas as well as inter-city travel – Israel still lags behind. The solution to the problem of congestion in the Gush Dan area is in rail travel.

Regarding peripheral areas, the Adva Center report recommends investing in regional public transportation, together with the development of regional employment centers. This is in sharp contrast to the present policy, which places the emphasis on a future of commuting from the periphery to the center and back – a solution that is not only inefficient but also will fail to ease traffic jams or social gaps. 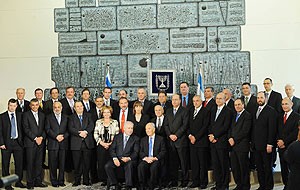 No Paradigm Change in Sight