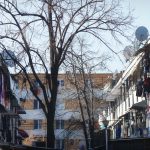 Some people are poor because other people are very rich, whether we are talking about income, the effects of climate change, of natural and man-made disasters, or of a transportation policy focused on private rather than public transportation.

What we have seen over the past 20 years is a redistribution of wealth, with more of the national income going up to the top, and less of it stopping at the middle and the bottom.

If the top 1% own natural resources and industrial plants that spew out toxic waste, they hire lobbyists to prevent legislation designed to require waste disposal systems that protect the environment. So people are air and water-poor because they live in areas in which noxious wastes enter their air and water supplies. And poor people are those most likely to live in those areas.

Not only that: here I would like to quote Philip Alston, UN special rapporteur on extreme poverty and human rights: He contends that the impacts of the climate crisis could increase divisions: “We risk a climate apartheid scenario, where the wealthy pay to escape overheating, hunger and conflict while the rest of the world is left to suffer”.

Equality in Times of Corona
Israel – A Social Report 2020: The Public Interest Needs to Return to Center Stage
Engines of Equality: A New Way of Looking at the National Budget
State’s inability to fix the housing crisis leaves many out in the cold
Central Government Subsidies of Municipal Budgets, 1997-2017