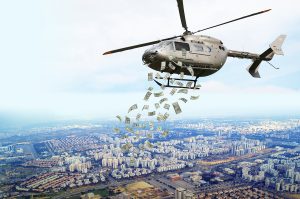 It is possible to give all the residents of Israel and people whose main source of income is in Israel, an amount equal to the current minimum wage of $1500 for a period of three months

Governments use bureaucratic mechanisms to face crises such as the present one: increase unemployment or income maintenance allowances, support small businesses, delay tax payments, all of which are included in the Israeli government´s NIS 90 billion aid package.

There are two problems with this aid package. The first is logistical: it is time consuming to fill out forms, check eligibility criteria and more. Today, two weeks after the plan was announced, many know that it does not respond to their needs and many others realize that there is nothing in it for them. New business owners, unregistered businesses (a common practice among Bedouin women business owners in the Negev, and others as well), stateless persons such as the refugees from Eritrea and the Sudan — are not included.

The second problem is financing. Governments use two primary means of funding: quantitative easing and budget financing. The latter benefits households, as it gives them money. It can be accomplished by increasing the budget deficit or by raising taxes. It encourages consumerism that upsurges production, and the market is therefore rebooted.

Problems? Mainstream economists, for example, claim that a high deficit damages a country´s financial credibility and burdens future generations. Another way is to raise taxes, that is take money from well-to-do households and transfer it to households hit hard by the economic crisis. Mainstream economists oppose this too, contending that taxing those who have the means to invest and create jobs might impair the country’s ability to get the market´s wheels rolling again.

Quantitative easing is a way of increasing the credit supply in the market when the usual means for growing liquidity, such as lowering interest rates, are not enough. The central bank purchases bonds from banks and insurance companies that, in turn, offer it as credit to businesses. Quantitative easing benefits large corporations by giving them cheap credit with the hope it will be invested in manufacturing and upsurge employment – getting the market going again.
Problems? Corporations might use the credit for financial rather than job-creating investments.

Another idea supported by a number of experts is to “pour” money directly to the people — a measure known as “Helicopter Money.” The term was coined by the rightist American economist, Milton Friedman, as a hypothetical exercise. Today, well-known economists, including Ben Bernanke, former Chair of the US Federal Reserve Bank, view it as a practical suggestion. In 2003 and 2016, Bernanke stated that in a severe economic crisis, such a measure could be considered. He is not alone: Willem Buiter, Chief Economist at Citigroup; Janet Yellen, another former Chair of the Federal Reserve Bank; and recently – Prof. Eran Yashiv of Tel Aviv University (Haaretz, March 23, 2020), all expressed similar thoughts.

The idea is based on the fact that today´s money is not made of precious metals such as silver or gold. Nor is it paper money — notes – representing amounts of actual gold reserves. (Many young people do not know that up until the 1970s, many countries, including the US, had held gold reserves – as a guarantee to redeem promises to pay note holders – in well protected fortresses such as Fort Knox.
Nowadays, money is still represented by notes printed by a country’s Central Bank, but there are no reserves to guarantee their worth except for the public´s trust. (By the way, the precious metals of olden times had no inherent worth to them either, aside from people´s decision to assign them value).

Therefore, the idea supported by a number of experts – to print money and “drop” it from helicopters (that is, deposit a Central Bank check in our bank accounts) – is not farfetched. It is feasible because money is not mined from the ground but is a manmade product.

For example, it is possible to give all the residents of Israel and people whose main source of income is in Israel, an amount equal to the current minimum wage of $1500 for a period of three months. Those who wish to do so, will be able to donate their allowance to others.

This is, of course, a rare, one-time measure that can only be used in times of severe economic crisis. Otherwise, the money dropped from the helicopter will lose its worth in the public’s eye – and consequently its economic value.

In addition, under a best-case scenario, the World Bank would be doing this for all humanity. This would help to eliminate competition between countries, namely “you printed 100 billion, so we will print 110 billion.

This measure will naturally be opposed by many, including the central banks of the wealthy states because of the resulting damage to their monopoly of the international financial arena.

“Helicopter Money” would be much more helpful than unemployment compensation or small business loans. No bureaucracy or eligibility check is required. Moreover, there is no need to pay it back, and it does not impact either the government’s deficit or the household’s debt.

Something to think about in times of Corona.

The Social Implications of The Corona Crisis: Shmuel, a senior citizen from Beer Sheba