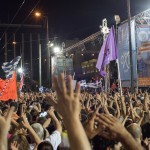 We are shocked that the EU institutions and European leaders are imposing on the people of Greece a further program of austerity that will severely undermine the living conditions of women and men and plunge them into a deep crisis of deprivation. This hits Greek women particularly hard as they will have to provide the safety net of last resort through intensified work of taking care of their families, friends and communities.

As feminist economists, as well as many other economists, have stressed over many years, the debt burden is unsustainable, this fact has recently even been acknowledged by the IMF. Thus, the hardship imposed on Greek people will not resolve the problem of its indebtedness, but it will rather worsen the great depression.

The fate of women, men and their families should not be abandoned by EU institutions and politicians and left in the hands of financial powers. The same neoliberal political perspective under the name of “structural adjustments”, has led to enormous sufferings and political instability in Latin America, Asia and Africa. As we know, the vicious circle was only interrupted by a drastic change in political perspective and policies.

Women across Europe, although in different ways according to class, citizenship and ethnicity, have already been disadvantaged by the neoliberal policy of the EU institutions and member state governments. The proposed action against Greece will further damage women’s economic and social status and autonomy in all EU countries.

Painful lessons of history, especially of the First and Second World War, should never be forgotten. Europe has to be alert to the political and economic dangers that are embedded in this austerity approach. Furthermore, history teaches us that these problems can only be solved by significant debt reduction, as for example in 1953, and by international solidarity and collaboration.

We call upon EU leaders and in particular the government of Germany to come to an agreement with Greece respecting the dignity of Greek people and democratic processes, including

Signed by 135+delegates at 24th Annual Conference of International Association for Feminist Economics as personal expression of concern.