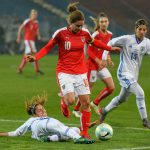 In November 2012, the Adva Center published a study by Valeria Seigelshifer entitled, “Changing the Rules of the Game: Examining the Sports Budgets in Israel with a Gender Lens“. This was a pioneering study, which demonstrated, for the first time ever, with dollars and cents, discrimination in the allotment of sports budgets. The results were clear: women and girls receive less for sports from the public coffers than men and boys.

Another contribution of the study was a gender analysis of the criteria for financial support to sports teams. It showed that those criteria give greater weight to parameters in which men have an advantage and in so doing preserve the status quo, in which more men and boys are involved in sports supported with public resources than women and girls.

In 2014, after the Israeli government passed resolution 2084 requiring government ministries to perform gender analyses of their budgets, the same study served as an model of how to do a gender analysis for the Ministry of Sports. Since 2015, the Ministry has been publishing such analyses in its budget books.

But that was only the beginning: in February 2019, the women’s soccer team of Beer Sheba submitted a court petition over discrimination in financial support, in which the Association for Civil Rights in Israel was also involved as a plaintiff. On September 5, 2019, the court handed down a decision in favor of the team and instructed the Beer Sheba municipality to increase its financial support. The verdict included the main contention of the Adva study:

“The present criteria lead to a preference for funding teams of longer standing and greater popularity, which creates a vicious circle, in which teams that are smaller and less popular do not have a chance of competing, because the very rules of the game are against them.”

This case illustrates the role of the Adva Center as a research center that places new issues on the public agenda: issues that are later taken up by other organizations. The impact of the research work of the Adva Center is not always visible in the short run. In the present case, seven years after publication of the study, it served as the anchor for the arguments of the plaintiffs in a gender discrimination case and was quoted at length in the court’s verdict.

The Care Deficit: What it Means and How it Can be Reduced
The Latest Enemy of Neo-Liberals: Single Mothers
More People Toting Guns: The Latest Cost of the Occupation
In government jobs, women are still way behind
Animation: Gender Mainstreaming Municipal Policy