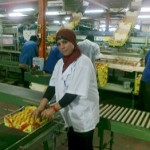 It is not uncommon to hear declarations by senior policymakers that the advancement of women in general, and Arab women in particular, is key to the advancement of society as a whole. Yet a huge gap persists between these declarations and their implementation, such that the economic, social and political status of Arab women is today among the lowest – if not the very lowest – in Israeli society.

This position paper reports on the status of Arab women in the labor market, barriers that impede their integration into jobs, and proposals for removing these barriers.

Hidden Figures in Israel: A Gender-Sensitive Approach to the Corona Crisis
When a Feminist Initiative is Institutionalized: Gender Responsive Budgeting
Behind the Numbers: How the Coronavirus Affected Women in Israel
Vital Workers in the Time of Corona
Adva Center Facilitates a Breakthrough: Social Changers=Long-Distance Runners