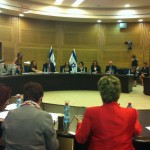 Without gender-responsive budgeting, resources may be allocated in a such a way that they fail to promote greater gender equality and fail to contribute to the breakdown of the gendered division of labor in society.

As far as we can judge from the present version of the Budget Arrangements Law for fiscal 2013/2014, the national budget will have an adverse effect on two groups of women: working mothers and low-income women. Thus, rather than serving to narrow the economic gaps between women and men, the budget in its present form is liable to widen them.

The Cost of Occupation under Coronavirus
Behind the Numbers: How the Coronavirus Affected Women in Israel
Will the Corona Crisis Transform the World Order? No Way!
Vital Workers in the Time of Corona
Israel between Corona and the Occupation