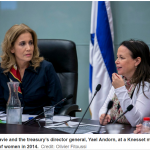 Excerpt from an article by Tali Heruti-Sover in TheMarker, February 27th 2018:

Here is an interesting figure: About 60 percent of all employees in Israel’s Public Security Ministry are women. Sounds okay but don’t led this figure mislead you. When you examine the median salary on offer at that ministry, you discover that in 2016 men earned 25,000 shekels (about $7,200) a month, in contrast to 14,800 shekels paid to women. In addition, despite the large proportion of female employees, the Public Security Ministry – like the other government ministries in the country – also have large gender gaps when it comes to the number of women in managerial positions.

Among executives in senior departmental posts at the ministry, there are eight women compared to 23 men. These women earn an average gross salary of 23,000 shekels a month, while the men earn 30,000 shekels – in spite of the fact that the women have almost twice as much seniority: 17 years in the civil service compared to nine years among their male counterparts. On the other hand, among this group only seven women have an academic degree, compared to 20 of the men. On the level of coordinators and middle management, there is actually a majority of women (71 compared to 59 men), but the men’s salary is still higher: 17,000 shekels compared to 14,000 for the women – even if, on average, the women have more seniority.

Four years after there was a decision to require government ministries to present what is referred to as a gender audit of their budgets, the picture is particularly gloomy. Since the initiative taken then by MK Aliza Lavie (Yesh Atid) – who convinced then-Finance Minister, Yesh Atid chairman Yair Lapid, that gender gaps would only be reduced if clear and accurate information were provided – every ministry is supposed to submit an annual budget request based on principles that facilitate a better understanding of workplace relations between men and women, both in terms of salaries and funding earmarked for various projects involving them.

However, an examination of the ministries’ recent reports on the gender situation, with proposals due to be incorporated in the 2019 state budget, indicates that the subject has been only partially internalized. The ministries do not all present the requisite data; indeed, often more information is hidden than revealed. A “mapping” effort, albeit based on partial information from the ministries, reveals a similar picture: Men always earn more, even when there are more women in middle management, and even if women have more seniority and education. The data are surprising because in the civil service we would have expected smaller gaps, if any.

Barbara Swirski, director of the Adva Center – an NGO that monitors economic and social developments in the country – analyzed the ministries’ data in advance of a discussion held Monday in the Knesset Committee on the Status of Women and Gender Equality. Her most interesting finding concerned the small number of female senior executives.

“For the most part, women also benefit less from the budgets of the various services, the grants and the scholarships. Even among those providing outsourcing services [to the ministries], the number of women is small. More importantly, only a minority of the ministries revealed any steps being taken to increase gender equality, and not a single ministry said it had initiated an examination of what is needed as a result of a gender analysis. The conclusion is that there’s still a long way to go to before we properly exploit the potential of gender budgeting,” adds Swirski.

For the full article in Haaretz.com

Engines of Equality: A New Way of Looking at the National Budget
Adva Center Facilitates a Breakthrough: Social Changers=Long-Distance Runners
New Poverties? Look to the New Rich for the Causes
State’s inability to fix the housing crisis leaves many out in the cold
Central Government Subsidies of Municipal Budgets, 1997-2017