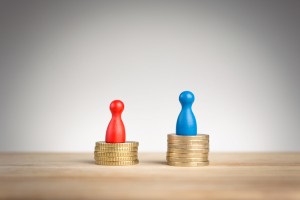 In 2014, the average monthly salary of Israeli women was 67% of men’s average monthly salary, compared to 68% in 2013. The gender monthly salary gap decreased by 4% over the last ten years. If the trend continues, it will take about 80 years to close the gap.
The hourly gender pay gap is smaller but consistent: 16% over the last decade, with only minor variations. The main reason for this stability is the fact that the gap is due to structural characteristics of the labor market, which are difficult to alter: significant occupational segregation with lower pay for typical “feminine” occupations; under-representation of women in senior management positions; working norms that prevent women from making progress, such as especially long working hours, and finally, gender stereotypes and discrimination.

The Jewish/Arab pay gap is larger than the gender pay gap
Gender pay gaps are greater among Jewish men and women (36%) than among Arab men and women (27%). The lower gender pay gap among Arabs is due to the low labor force participation of Arab women – 27.6% In 2014. However, the majority of employed Arab women have college degrees. For this reason, the hourly pay gap among Arabs in Israel is the reverse of the pay gap among Jews in Israel: men’s average hourly wage is 92.6% That of women. Comparing Jews and Arabs in Israel, the monthly pay gap, in favor of Jewish workers, is quite large: 31% among women and 40% among men. Jewish women earn on average 6% more than Arab men.

Women in managerial professions as well as women in sales and services earn
less than men
Gender pay gaps exist in both “masculine” and “feminine” professions. There are twice as many men as women employed as managers, and they earn on average 26% more per month than women. The good news is that the hourly pay gap is lower – men earn only 14% more than women, and this gap has decreased by 10% since 2012. Regarding sales and service work, 62% of the persons employed are women. Women’s average monthly salary is 63% that of men, and the hourly pay gap stands at 22.5%.

The gender pay gap starts in the 25-54 age group and is the largest at ages 65+
Among workers aged 15-24, women earn slightly more than men. This is mainly because compulsory army service is longer for men than for women. However, when we come to the main working ages, which are also the ages of giving birth and raising young children, the trend reverses and women earn less. The largest gap is at ages 65+ and this is probably due to the fact that the majority of women still working are employed in part time, low income jobs such as personal care-giving.

Labor market sexual segregation has a prominent role in explaining gender pay gaps
At ages 25-54, 36% of women employed in 2014 were concentrated in 10 professions,compared to 22% of men. The most prevalent professions among women are teachers, administrative workers and caregivers, in which salary levels are relatively low, even for employees with college degrees. Men are concentrated in high-pay technical and managerial professions (managers, computer programming), as well as in driving and security occupations. In fact, the average monthly salary of men in the 10 most prevalent professions among men was NIS 13,858 in 2014, more than double that of women – NIS 6,561. The hourly average pay gap was 33.5%.
The gender pay gap is evident in blue-collar jobs as well: while women employed as caregivers and teachers’ assistants earn the minimum wage or less, men employed as drivers and guards earn 150%-180% of the minimum wage.
Among women with college degrees, segregation is just as strong. Almost 30% of college-educated women are employed as teachers, nurses and social workers. Among men with higher education, about 15% are in technical and engineering professions and another 5% are professional and senior managers, professions in which the average monthly wage is NIS 17,000 or more.

The Hebrew Highlights in Infographics