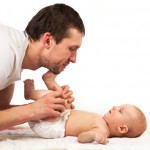 The integration of women into the work force is considered to be both a goal and a measure of gender equality. However, the participation of men in housekeeping and child care (the “care economy”) as a parallel aim that should be promoted in order to achieve this goal has not been given sufficient attention.
The traditional model for policy planning is based on the perception of men as the main income-earners and women as the main caretakers of the family. This model, when considered together with the lack of governmental arrangements for childcare, preserves a gendered division of labor that also dictates norms in the workplace.

In Israel, about a quarter (26%) of employed women aged 20-45 discontinue working following the birth of a child, as opposed to fewer than 1% of employed men. Another 16% of women decrease their working hours after having children, compared with only 3% of men (Central Bureau of Statistics, 2010). This pattern of non-continuous employment has implications for the economic independence of women, their ability to compete in and re-enter the job market, and their pension savings. The gendered division of labor also directly impacts gaps in the labor market, which manifest themselves in gender wage differences, part-time jobs being more common among women, the over-representation of women in lower-level jobs, women’s under-representation in management, a higher proportion of women employed via subcontractors or employment agencies, segregated professions, and employment insecurity for women.

In recent years, some countries in the European Union have launched initiatives to promote equality between men and women that do not focus solely on advancing women in the labor force, but that also seek to encourage men to actively participate in caring for their children. This approach evolved from an understanding that the existing labor norms do not allow men to be full partners in raising their children, and that true equality in the labor market between men and women will not be achieved without an egalitarian division of housework and childcare.

Maternity leave is brief in Israel (14 weeks) compared with most European countries, where maternity leave averages 16-24 weeks. In addition, women in the European Union enjoy “parental leave”, i.e., an additional period that parents can divide between themselves to care for their children. As we have shown, women comprise the vast majority of those who take advantage of this benefit, which significantly extends their paid leave.

The fundamental assumption of this proposal is that the right of parents to have paid leave from work to care for their children should be individual, non-transferable, and not contingent upon the mother’s eligibility for maternity allowance.
To enable fathers to be full partners in the raising of their children, a “road map” should be drawn to equalize maternity and paternity leave. In Israel, the first six weeks following a birth are mandatory for the mother; therefore a first step might be setting paid paternity leave of six weeks that is non-transferable. The conditions of eligibility for paternity leave will then be set according to parameters of the participation of fathers in the labor force, similar to the conditions used to grant maternity allowance to mothers.

Behind the Numbers: How the Coronavirus Affected Women in Israel
Vital Workers in the Time of Corona
Adva Center Facilitates a Breakthrough: Social Changers=Long-Distance Runners
The Care Deficit: What it Means and How it Can be Reduced
The Latest Enemy of Neo-Liberals: Single Mothers